Despite the fact that there are several different types of solar thermal power plants, they are all the same in that they utilize mirrors to reflect and concentrate sunlight on a point. At this point the solar energy is collected and converted to heat energy, which creates steam and runs a generator. This creates electricity. 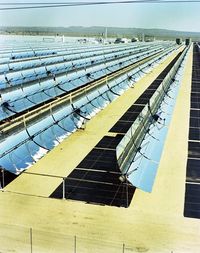 These troughs, also known as line focus collectors, are composed of a long, parabolic shaped reflector that concentrates incident sunlight on a pipe that runs down the trough. The collectors sometimes utilize a single-axis Solar tracking system to track the Sun across the sky as it moves from east to west to ensure that there is always maximum solar energy incident on the mirrors. The receiver pipe in the center can reach temperatures upward of 400°C as the trough focuses Sun at 30-100 times its normal intensity.

These troughs are lined up in rows on a solar field. A heat transfer fluid is heated as it is run through the pipes in the parabolic trough. This fluid then returns to heat exchangers at a central location where the heat is transferred to water, generating high-pressure superheated steam. This steam then moves a turbine to power a generator and produce electricity. The heat transfer fluid is then cooled and run back through the solar field. 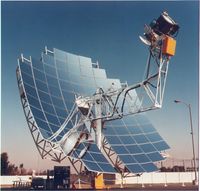 These are large parabolic dishes that use motors to track the Sun. This ensures that they always receive the highest possible amount of incoming solar radiation that they then concentrate at the focal point of the dish. These dishes can concentrate sunlight much better than parabolic troughs and the fluid run through them can reach temperatures upwards of 750°C.[2]

In these systems, a Stirling engine coverts heat to mechanical energy by compressing working fluid when cold and allowing the heated fluid to expand outward in a piston or move through a turbine. A generator then converts this mechanical energy to electricity. 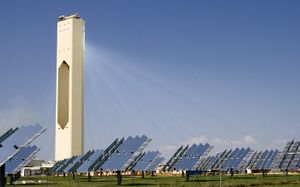 Solar power towers are large towers that act as a central receiver for solar energy. They stand in the middle of a large array of mirrors that all concentrate sunlight on a point in the tower. These large number of flat, sun tracking mirrors are known as heliostats. In the tower, there is a mounted heat exchanger where the heat exchange fluid is warmed. The heat concentrated to this point can be 1500 times as intense as incident sunlight. The hot fluid is then used to create steam to run a turbine and generator, producing electricity. One drawback with these towers is they must be very large to be economical.

Any cookies that may not be particularly necessary for the website to function and is used specifically to collect user personal data via analytics, ads, other embedded contents are termed as non-necessary cookies. It is mandatory to procure user consent prior to running these cookies on your website.